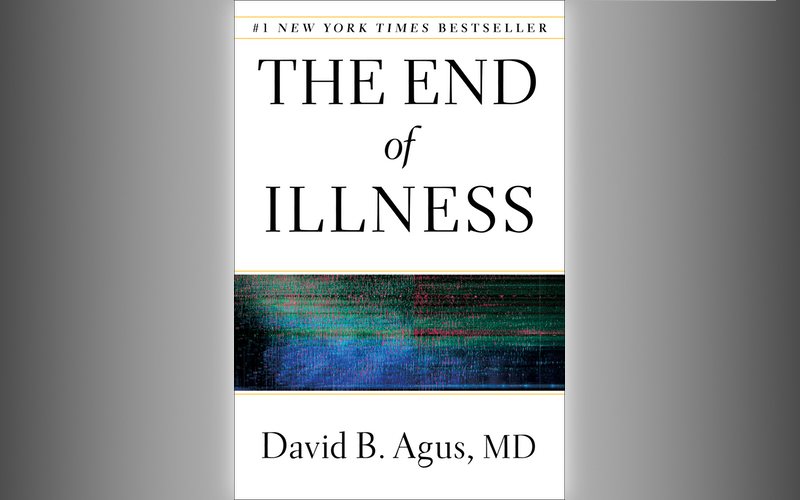 “The End of Illness” By David B. Agus, MD

I just finished reading The End of Illness, a provocative new book by David Agus, MD.  Agus is a medical oncologist and a leading cancer researcher. The focus of his research has been the varied mechanisms of cancer development.

One of the simple, profound conclusions he reaches, is that we must stop thinking about cancer as a “thing” to be cut out or poisoned, but as a  pathological systemic process.  Cancer, he believes, should be seen as a verb.  We don’t just “have cancer.” Instead, we “cancer”.

Dr. Agus traces this flawed understanding of cancer to “germ theory,” one of the foundational theories of modern medicine.  According to this theory, sickness is caused by the invasion of external agents such as viruses or bacteria.  Treatment consists of killing the invaders.  This was validated by the development of antibiotics and vaccinations in the nineteenth and twentieth centuries, and the subsequent eradication of many infectious diseases.

Due to its historical success, germ theory has become deeply internalized, shaping medical perception.  The causes and treatment of most diseases are sought within its framework.  The search for chromosomal anomalies, and the development of nano-surgical procedures and increasingly sophisticated imaging studies are all modern manifestations of this worldview.

Yet many of the chronic diseases that plague us today, such as fibromyalgia, rheumatoid arthritis, diabetes, and cancer, do not have singular causes and are not easily located within the body.

If satisfactory answers elude us, we may be using the wrong model to frame the scientific research. This, Agus believes, is the reason for the failure of the “war on cancer”.

Chiropractic, in my view, has suffered a similar failure.

Founded in 1895 by D.D. Palmer, chiropractic theory asserts that the spinal joint fixation, or subluxation, lies at the root of many health problems.  The loss of motion in the subluxated joint generates compressive forces which irritate spinal nerves.  This irritation, in turn, alters nerve conduction to the various systems of the body, preventing the body from properly maintaining itself.  This can cause a variety of symptoms, ranging from back pain to gastrointestinal distress.

It is not coincidental that chiropractic theory developed as germ theory took hold of medical thinking. The subluxation, like the germ, was a reductionist explanation for the cause of disease.  Chiropractic treatment, however, was drugless. And it was an effective alternative to the many toxic remedies prescribed at the time by medical doctors. Treatment consisted of spinal manipulation to mobilize the joints and relieve nerve pressure, allowing the body to heal itself.

Chiropractors need to see the subluxation not as a “thing” to be realigned or mobilized, but as an active response to forces at play in the body: as a verb and not a noun. We don’t just have subluxations.  Rather, we subluxate.

Dr. Agus has embraced an approach to medical diagnosis and treatment based upon the growing field of proteomics.  Using new technologies that can map the state of protein production within the body, one can see patterns of cellular activity. These patterns, which vary from person to person, indicate a body in or out of chemical balance.  They can reveal the early stages of disease development, which precede symptoms.

Treatment is highly individualized, focused on bringing protein production into balance.  The causes of the imbalance can be varied.  Therapies–whether pharmaceutical, nutritional, or life style modification–are aimed at restoring balance rather than the treatment of symptoms.  One thinks of traditional Chinese and Indian systems, which are focused on restoring harmony to the body.  When in balance, the body is better able to prevent the onset of disease, better able to resist bacterial or viral invaders, and less likely “to cancer”.

In chiropractic, some of us are shifting away from a “subluxation as primary cause” model.  It has become clear that there are dysfunctional patterns which manifest as increased tension in the musculoskeletal system. Over time, tightened soft tissues become painful, restricting the motion of their articular connections and causing further pain and dysfunction.  In this case, the subluxation is part of a chain of events embedded in a framework of systemic imbalance.

A broader chiropractic approach includes evaluation of the forces at play in a person’s life. How is their workstation set up? Are they exercising?  If so, how? Have they had sports injuries or motor vehicle accidents?  The answers to these and other questions will explain why the spinal joints have become subluxated.  Treatment will consist of soft tissue and spinal manipulation to address the structural effects of these imbalances, but more fundamentally treatment will focus on the underlying imbalances that often precede symptoms.

The scientific method is largely a reductive process.  We attempt to understand complex processes by reducing them to their most basic components.  This method has proven very effective for building bridges and skyscrapers, microchips and batteries.  But it has been less effective in understanding the body.  New discoveries in the physical sciences have taught us that complex systems are often emergent, defined by the higher level integration of their components. There are limits to reductionism.

Both chiropractors and medical doctors have been operating within a nineteenth century framework. For chiropractors, the world has been framed by the subluxation.  For medical doctors, it has been framed by germ theory.  Both antibiotics and  spinal adjustments can be powerful treatments–often the only treatments necessary for particular conditions.  But when the problem is nonlocal, emerging as the sum of multiple, deeply rooted causes, those modalities are often inadequate.

The body has a powerful capacity to heal itself.  Our role as healers is to support its ability to do so. Whether with pharmaceuticals, chiropractic adjustments, acupuncture needles, or ayurvedic herbal formulas, treatment will be most effective when we honor the body for what it is: a dynamic system in constant flux.

Dr. Ricky Fishman has been a San Francisco based chiropractor since 1986.  In addition to the treatment and prevention of back pain and other musculoskeletal injuries, he works as a consultant in the field of health and wellness.  He is dedicated to the re-visioning of health care for the twenty first century.