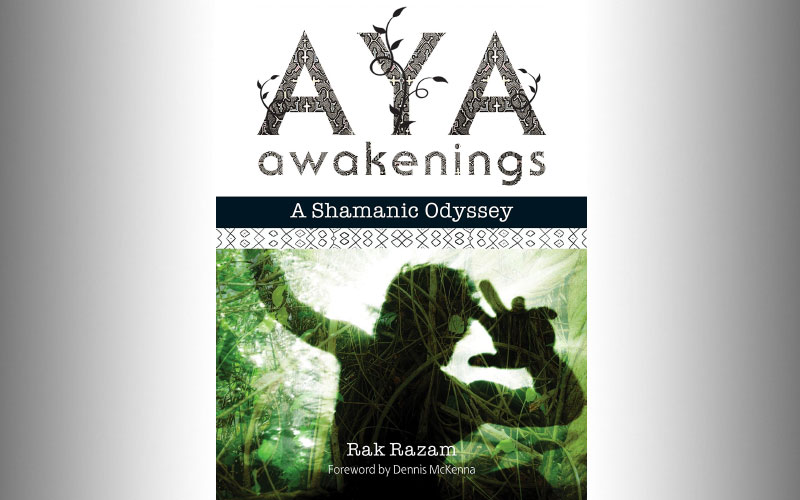 There are at least two types of journalism. There is the classic detached, distanced, “objective” journalism. And then there is “Gonzo” journalism; most notably practiced by the likes of Hunter S. Thompson and Tom Wolfe. In this style, there is no need for distance; rather, the journalist is fully immersed in the story and reports it from the inside.

Aya: Awakenings is the story of gonzo journalist Rak Razam. In 2006, Razam was on assignment for Australian Penthouse magazine to report on an ayahuasca conference taking place in the city of Iquitos, Peru, in the Peruvian Amazon.

For those who might not be familiar, ayahuasca is a psychedelic brew made from vines native to the Amazon. It has been used for millennia to bring about non-ordinary states of consciousness and facilitate communication with hidden worlds.

Razam had had a few psychedelic experiences prior to his visit to the jungle, but knew there was much more for him to discover about the inner workings of this magical tea. He arrives in Iquitos, and hits the ground running.

After a few days of lectures by experts and local curanderos (healer/guides/shamans) on the science and art of this medicine, Razam takes part in many ayahuasca ceremonies. While on these journey’s, he experiences flights through multiple dimensions, encounters with spirits, the energetic dissolution of body and mind, and being stripped of his ego: a state of non-duality.

And as he explores these inner realms, he is also immersed in the very real, “outer realm” of spiritual tourism, on full display in Iquitos. In the Amazon region, shamanism is big business. It’s a major income generator for many of the local towns, small and large. And as in most capitalist marketplaces, competition can be fierce. There are legitimate curanderos, and there are unscrupulous charlatans. Razam cautions the reader: Let the buyer beware.

In Conradian fashion, Razam travels down river in search of some kind of truth that he believes the medicine (as ayahuasca is called) has yet to reveal. He makes multiple stops, visiting with various curanderos–some recommended to him, others met by chance.

After his river journey, Razam goes on to Cuzco, the ancient Incan capital, high in the Andes Mountains. The spiritual tourism business is thriving here as well, with offerings of ayahuasca and huachuma (a cactus derived psychedelic, native to this region) posted on travel agency and hotel windows all around town.

From there he is off to Ollantaytambo, outside of Cuzco, in the heart of the Peru’s Sacred Valley. There, he climbs above the valley with several other medicine seekers–reveling in the cosmic connection between heaven and earth while observing the perfectly terraced mountainsides, built hundreds of years ago by Incan agriculturalists, in perfect harmony with the sun and sky.

A few days later, Razam gets on a rickety train to Aguas Calientes, a small town that sits at the base of Machu Picchu: the most famous archaeological site in South America. He marvels at the multitude of tourists, drawn together by forces known and unknown.

At this point, inconveniently, Razam runs out of money. He doesn’t have enough to both pay the entrance fee to Machu Picchu and return to Lima in time for his flight home to Australia.

But Razam has heard about a hidden entrance to the site; a way to elude the toll takers. In the pre-dawn darkness, with only a flask of water and a head lamp, he struggles up the side of the mountain, losing his way a few times. He finally arrives at the slit in the fence and squeezes in.

The Incan ruin is a wonder, and a mystery. Perched on a high precipice, surrounded by a spectacular jagged mountain range, Razam senses power in the purposeful alignment of the stone structures, the peaks, the sun, the moon and the stars. There is energy emanating from this energetic vortex. Razam finds a secluded spot to avoid the security guards, and waits for the sun to rise.

As he waits, he slips into a state of energetic hyper-awareness. The material world around him dissolves into vibrating wave forms; all sense of self disappears, as does any fear of becoming “no-thing.” It is a state of ecstatic joy; of boundless love—experienced without the influence of the “medicine.”

Here the book ends, with Razam floating in a sea of cosmic consciousness. It’s not clear whether he has found the “truth” he was seeking–but in that moment of an everlasting, ecstatic now, it is enough.

The number of books on entheogenics (substances that enable one to experience God) is growing quickly. The early days were peppered with auto- and semi-autobiographic accounts, like the writings of Aldous Huxley and Carlos Casteneda. With the psychedelic revolution of the 1960’s, led by people like Timothy Leary, Ken Kesey and Ram Das, LSD and other mind-altering drugs entered mainstream youth culture. But the backlash of a government terrified of an “out of control” youth movement was fierce and gave rise to the 50-year “war on drugs.”

But things have changed.  In the 1980’s, Terence McKenna—along with his brother Dennis–began writing about the power and value of entheogenic substances. As the potential psychological benefits become more apparent, that trickle has become a surging wave. Anxiety, depression, drug addiction, PTSD, end-of-life terror and other maladies are responding to the appropriate use of psychedelic substances. Michael Pollan, the great health and science journalist (who wonderfully merges classical and gonzo approaches) has written two recent books on the subject

But among all of these books, there are few which offer such deep experiential insights and socio-political analyses as Aya: Awakenings. Along with vivid descriptions of personal journeys, the book provides a valuable framework in which to position these experiences. Razam’s critique of the burgeoning spiritual tourism business is tough, yet fair. He points out the potential for harm if these substances are taken without proper support. He writes about the proliferation of local and western “shamans,” who do not always operate with the utmost integrity. But he also notes the global need for healing and the importance of more and more people studying these medicines–so that their benefits can spread around the planet; and healing can take root.

In the canon on entheogenic medicine, Aya: Awakenings deserves a central place.

Dr. Ricky Fishman has been a San Francisco based chiropractor since 1986. In addition to the treatment of back pain and other musculoskeletal conditions, he works as a consultant in the field of health and wellness with companies dedicated to re-visioning health care for the 21st century. He is the founder of the health news and information website, Condition: Health News That Matters.

Bufo Alvarius and the Entheogenic Revolution