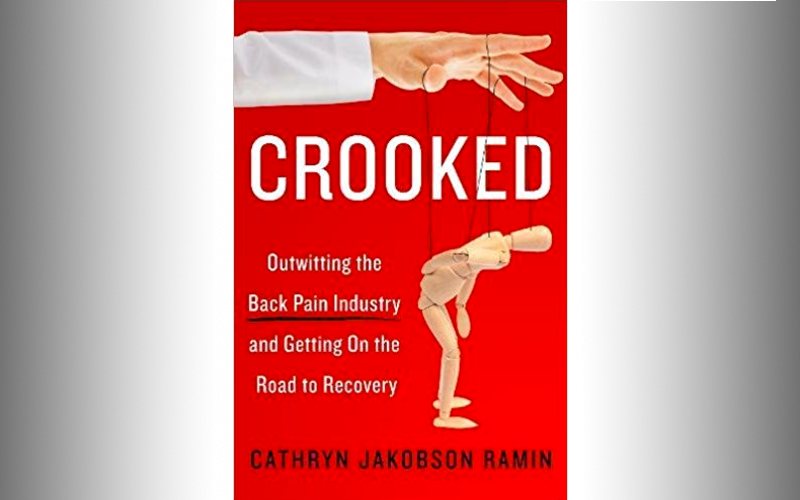 “Crooked: Outwitting the Back Pain Industry and Getting on the Road to Recovery” by Cathryn Jacobson Ramin

I first heard about Crooked: Outwitting the Back Pain Industry and Getting on the Road to Recovery from a patient of mine who was about to undergo his second spinal surgery.

“Wow, she really trashes chiropractic big time,” he let me know. “And I think the book is getting a lot of notice.”

So first, a disclaimer: I am a chiropractor.

But I am not one to shy away from criticism, so I immediately bought the book and started reading.  Granted, it was hard for me to take in the venomous barrage aimed at my profession. But I plowed forward.

Sadly, I had to admit that some of Ms. Ramin’s critique was accurate.  She described the use of X-rays to diagnose subluxations, or misalignments of the vertebral joints. She described suspect diagnostic procedures, such as muscle testing, to determine nutritional deficiencies. She wrote about chiropractors who, citing the “power” of the adjustment (manipulation), have patients lie down on the chiropractic table, get adjusted, and are asked to return a few days later for another very similar treatment. These programs can go on for many months; sometimes without a significant change in symptoms. Ramin also wrote about chiropractors going way beyond their scope of practice, claiming to cure a variety of organic diseases.

But Ms. Ramin was picking low hanging fruit. The overwhelming majority of chiropractors treat musculoskeletal pain and know that the most effective treatment is a combination of spinal manipulation and exercise.  Research bears this out. A good (and typical) chiropractor will prescribe rehabilitative exercise as an integral part of their treatment plan.  He or she will also examine a person’s life habits and make corrective recommendations accordingly.   What does your workstation look like? How much exercise do you get?  What kind of exercise is it? How do you relax?

I suspect that the author—a well-regarded journalist whose personal struggle with back pain inspired her to write this book—had a very bad chiropractic experience along the way, or interviewed someone who had.

But I bit my tongue, kept reading, and was rewarded with an excellent exposé of the back pain industry.

While Ms. Ramin reserved her first thrashing for chiropractic, she was equally rough on spinal fusion surgery and the sordid history of surgical implants, the limited value of imaging (from X-rays to MRIs), the hit-or-miss value of epidural injections, and the scourge of opioid prescription and abuse.

In my view, Ms. Ramin paints with overly broad strokes.  While there are clearly abuses to be found across the board, it is important to remember that the majority of practitioners are well intentioned, believe in what they do, and can perform tested therapeutic interventions that have value when applied in the right circumstances.

I have referred patients for whom my treatment did not work to orthopedists, neurologists, physical therapists, physiatrists, acupuncturists and others.  To the well-known dictum, “Physician, first do no harm,” I have added another: “Physician, know what you can do, and what you cannot.”  And then refer!

The problem with many practitioners is that they become identified with and attached to their modality.  Too often I have seen them hold onto patients for way too long; in part for economic reasons, but also because they could not accept that they were unable to help the patient.  In these situations, patients will frequently just drop out of care and refer themselves to someone else.

My experience has taught me that most patients are grateful when I acknowledge, in a timely manner, that we have hit a wall.  I provide them with highly qualified alternative therapies and practitioners and a reassurance that I am available for ongoing consultation should the need arise.

In addressing the psychological factors at work in chronic pain, Ramin spends several pages describing the work of the medical doctor John Sarno.

On the fringes of the back pain industry, Dr. Sarno (who died recently at age 94) believed that most back pain was emotionally based.  He called this Tension Myositis Syndrome (TMS).  He believed it was impossible to reduce one’s symptoms to a singular structural cause that could be cut out, manipulated, or massaged away. He believed that it was the fear of pain that perpetuated pain.

Because Dr. Sarno was an advocate of less treatment, he did not endear himself to the community of providers making boatloads of money in a billion-dollar industry.  At the same time, many have criticized Dr. Sarno himself as a reductionist, as he placed the cause of almost all back pain in the mind of the sufferer.

In the last section of her book, Ms. Ramin describes the modalities that she sees as most valuable.  They are almost all active therapies that can be done by the patient on their own: Feldenkrais, Pilates, yoga, tai chi, and functional exercise training. *

I found it curious that Ms. Ramin included Rolfing—a very deep and often painful massage protocol broken into ten sessions—as one of her recommended modalities.  The goal of Rolfing is the structural reintegration of the musculoskeletal system.  My curiosity was aroused since the theme of her book revolved around the need for active, patient engaged care. Rolfing is a passive modality in which the patient lays down and “receives.  It was the one piece in her “Solutions” section that did not seem to fit.

Overall, though, I believe that Ms. Ramin got it right.  As a society we have become used to being “fixed”, whether with a pill, a shot, a surgery, or a spinal manipulation.  Using a passive approach alone can create a dependency that is disempowering and can lead individuals away from real healing.

Ms. Ramin makes a powerful case. And while I hope she reconsiders the value of chiropractic care, perhaps through conversations with a skilled (ahem!) practitioner,  I agree on the whole with her conclusions.

Anyone who is suffering from back pain and confused about where to turn to find relief would be well advised to buy and read Crooked.

* There is, of course, a big obstacle to active care.  The back pain industry is enormous, and lots of people have their hands in the pie.  For those focused on financial gain, teaching people how to heal themselves through exercise and meditation, with low cost, low tech, self-help techniques and modalities, is not a great business plan. The author makes this point clearly throughout.

Dr. Ricky Fishman has been a San Francisco based Chiropractor since 1986. In addition to the treatment of back pain and other musculoskeletal injuries, he works as a consultant in the field of health and wellness with companies dedicated to re-visioning health care for the 21st century.
ricky@rickyfishman.com
www.rickyfishman.com