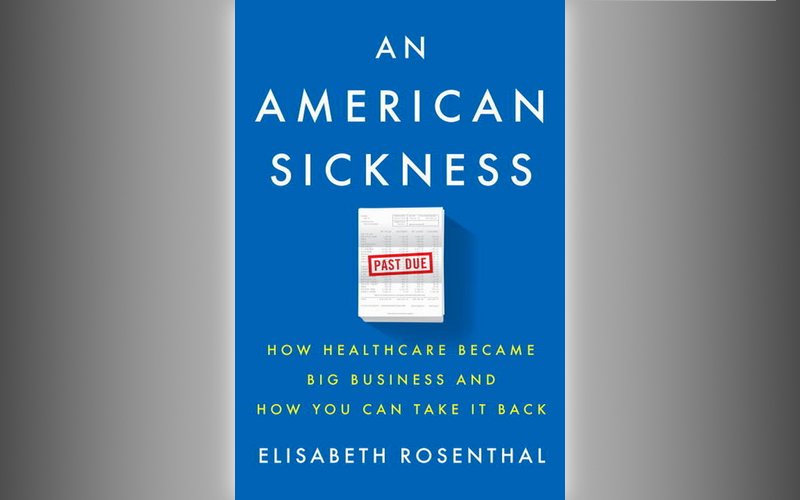 “An American Sickness: How Healthcare Became Big Business and How You Can Take It Back” By Elisabeth Rosenthal

The Republican Congress has been doing its best to bring down the Affordable Care Act (Obamacare) and replace it with the cruel joke that would be known as “Trumpcare.” Despite the fact that only 17% of the public supports the Republican proposals, the GOP is still trying to burn the ACA to the ground.

It is in this environment that Dr. Elisabeth Rosenthal’s new book–An American Sickness–has arrived. The timing could not be better!

For those who do not know, Rosenthal is a Harvard trained medical doctor.  She practiced emergency medicine for five years before giving up practice to become a science and health writer for the New York Times.  She is currently the Editor-in-Chief for Kaiser Health News.

Our president has recently said: “Health care is incredibly complicated.” I am glad that he finally realized what everyone in health care, from providers to patients, has known for decades.

An American Sickness shines a light on the dark corners of a system that needs to be understood so that it may be reformed and transformed.

We hear screams from the GOP that Obamacare is in a “death spiral”.  Although this is an exaggeration, and many of the problems with the ACA are due to Republican chicanery, we rarely hear the real reasons why the system is in the precarious state that it is.

The obstacles to reform

President Obama was only able to accomplish health care reform by granting outsized influence of powerful corporate interests: the pharmaceutical, medical device, hospital and insurance industries. Given the current way of “doing business” in Washington, DC., he had no choice.

Rosenthal explains how these corporate players assure their own profitability by plowing big money into the re-election coffers of senators and representatives.  Once the politicians are “bought off”, lobbyists for the medical industries are able to insert economically favorable language into legislation. (Some examples of this systemic “abuse” are listed below.)

Money flows from consumer and employer payments to insurance companies, as well as from tax payer contributions to Medicare, the largest health care payer in the country.  Payments are then passed through to those selling health care goods and services.

The end result is that big industrial players are able to extract inflated payments for the products they provide—despite the fact that those same services are provided for at a fraction of the price in other modern industrialized nations.

A sampling of abuse

Rosenthal writes about the development of new drugs that are no better than their predecessors. Yet because new formulations can be patented and substituted for older ones, the pharmaceutical companies are able to raise prices for these new drugs. She uses the example of mesalamine, an affordable, decades-old drug taken for ulcerative colitis. The manufacturing rights were sold to another company right before the patent expired.  After expiration, the new manufacturer placed the active ingredient in a gel coat, received a new patent and were able to sell the “new and improved” drug for an inflated price.  The “outdated” drug was removed from the shelves.

She tells of a strange, yet lucrative deal (for the pharmaceutical industry), made under President George W. Bush, which prohibits the nation’s largest purchaser of medicines–Medicare–from negotiating with the drug companies for lower prices.

Rosenthal also details abuses by practitioners through the use of “extenders.” One example she gives is of anesthesiologists who employ nurse-anesthetists.  The anesthesiologist is able to bill separately for themselves and the nurse, without the anesthesiologists ever seeing the patient. This can be done in up to five operating rooms simultaneously. This drives costs up dramatically, yet the practice– because of savvy lobbyists–is completely legal.

The examples go on and on, page after page, chapter after chapter.

What can individuals do?

Thankfully, Rosenthal makes suggestions about what can be done on an individual/consumer level as well as on a macro/political level.

–Be proactive: Ask your doctor or his office how much treatment/visits will cost up front.

–Be sure that labs and tests and outside consultations are within your insurance networks.

–Question why tests such as MRI’s, etc. are necessary.  Will the result of the tests effect treatment decisions?

–If medications are being switched, ask why from a clinical standpoint and whether it will affect your payment at the pharmacy.

What politicians must do

–Look to other countries that have versions of national health insurance for new models of delivery.

These represent just a small sampling of the many tips Rosenthal provides to enable us—as a nation—to take our power from the industries controlling our health.

As I write this review, the Republicans are being rebuffed yet again in their attempt to repeal and replace the ACA.  Senate Majority Leader Mitch McConnell, however, still decries the painful “death spiral” of Obamacare.  He rails against the rising premiums, narrowed provider networks and increasing co-pays and deductibles.  But Rosenthal makes it clear throughout her essential book, that what McConnell and other Republicans describe, are symptoms of a diseased national health care system rife with structural flaws on all levels.

The Democrats cannot pretend that the system is healthy, or that Obamacare is adequate as it stands.  They must acknowledge that they have been complicit in its creation and maintenance.  Then politicians on both sides of the aisle must come together and start to rebuild.

An American Sickness should be read by every person engaging our health care system, and by every politician working on reform.  It is simply the best description of how we got here and what we need to do to create a functional system that works for all Americans.

As a nation, we should heed Dr. Rosenthal’s recommendations and stand together as patients/consumers/providers against the exploitation that denies most of us high quality care—while it insures excessive compensation for those feeding at the health care trough.

Dr. Ricky Fishman has been a San Francisco based Chiropractor since 1986. In addition to the treatment of back pain and other musculoskeletal injuries, he works as a consultant in the field of health and wellness with companies dedicated to re-visioning health care for the 21st century.
ricky@rickyfishman.com
www.rickyfishman.com