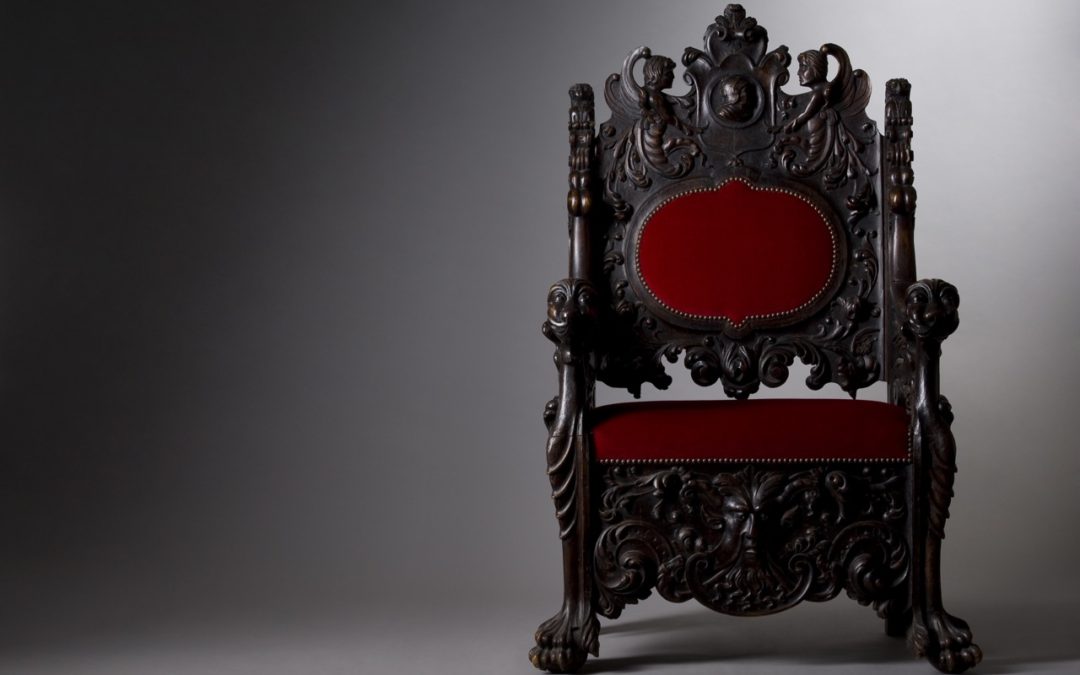 The objects with which we surround ourselves serve multiple functions. On the one hand they may be utilitarian: dressers, chairs, and desks that support our home and work lives. At the same time, they tell us and others who we are. Does our home or office convey sophistication (elegant furniture), intelligence (books) or artiness (paintings and sculpture)? Are we practical (sparely furnished rooms) or frivolous (surrounded by knick-knacks)?

These objects can also convey status and authority. A king’s throne, for example, sits squarely in the middle of the reception hall. It is likely the most ornately carved piece of furniture in the room and is placed on a platform, denoting power and proximity to God. Or take in contrast the simple stool, without frills, designating its user as a worker focused on completing a singular task.

Both “chairs” serve a function and tell a story. Like that king and those workers, we create our worlds with purpose.

Until recent historical times (about 10,000 years ago), our lives as homo sapiens were spent in small nomadic groups, hunting and gathering. With the advent of agriculture, we could produce our food without this constant search. This led to the accumulation of foodstuffs, the growth of population centers (cities) and the eventual rise of empires and nation-states. The need to maintain and govern these societies in turn gave rise to hierarchical social and political structures with great organizational and technological needs. As it is said, “necessity breeds invention.” And from the demands of those increasingly complex worlds were born the Scientific, Industrial, and now Post-industrial Revolutions.

While hunter/gatherer groups have always existed at the margins of society, most people have had to conform their ways of life to the demands of those in power; those who ultimately provided and/or secured their livelihoods. So people became farmers, then factory workers, and now IT workers. Each step in this process has confined people to smaller and smaller spaces; from the field to the assembly line to the cubicle. We have moved further and further from the open savanna that has always existed in our genetic memories—but our bodies are still biomechanically designed to do what we did 20,000 years ago.

Generally, the work of the modern world, whether that of an autoworker, an accountant or an engineer, is done in place. This reflects a dedication to efficiency, and to methods of production rooted in scientific reductionism. The more specialized ones task is, the more quickly that task will be completed, and the lower the unit cost of production. To support this efficiency, workstations have been designed to maximize productivity. As a result, the workbench and then the chair became essential features of our modern work environments.

The “Executive Chair” and the illusion of comfort

When I became a doctor, and opened my own office, I looked for the furniture that would both serve me functionally and also let my patients know who I was. I discovered “The Executive Chair”. Soft, deep leather cushions that felt like a loving embrace as I sank in. Ah, comfort! And authority! I believed that the words spoken from such a chair would be heard, absorbed and respected. With a big desk to match I could hold court in my chamber, on my doctors “throne.” But I soon noticed that after some initial moments of “comfort” I would begin to doze and lose my focus. And when I stood up, after 15 minutes or so, my back would be sore.

Why did this surprise me? I am a chiropractor. I understand the biomechanics of the spine. When we sink into a chair our spine becomes one big C-shaped curve– straining muscles, ligaments, and discs. As we compress the organs of our abdominal, cardio, and respiratory cavities, fluids stop flowing, toxins meant for filtration are reabsorbed and oxygen intake is minimized. The result: We lose our energy, become sleepy and put stress on our backs.

“Comfort” is a subjective experience. It varies with individual, cultural and historic context. In my parents time (the 1960s and 70’s), there was a clear demarcation between work and home life. Most people worked forty hours per week, and peoples lives were not tied to a computer screen and keyboard. In those days, a soft “comfortable” chair was just fine. The traditional executive chair, (especially if it was made of leather!) reflected affluence and authority, and the slight back discomfort it may have caused was worth the important message that it conveyed. Soreness was a small price to pay for living a life of (perceived) wealth and comfort. And as uncomfortable as it may have been after awhile, it was a far improvement over the seating of ones subservient workers.

But we are in a new era–the post-industrial digital age. The computer, which was heralded as a device to free up our time, has done exactly the opposite. Work hours have increased. “Fifty is the new 40” and a 60 to 70 hour workweek is common. People need to be focused for longer periods of time. The overstuffed, sleep-inducing executive chair is no longer acceptable. Using the recent science of ergonomics, we now know that the optimal position for focus and intellectual acuity is upright.

The so-called “ergonomic chair”, with its controls for seat height, tilt and lumbar support (to prevent the somnambulent slump) has now become the desired work place norm. It’s sleek, modular look blends seamlessly with the high-tech workstations for which it was designed.

On one hand, the development of these ergonomic chairs is an advance because they better suit our biological needs. They help reduce the amount of back strain, and enable us to stay more focused for longer periods of time. They exchange alertness for sleepiness as the modern definition of comfort. And with their high price tags (sometimes over $1000) they continue to speak authority, material success and status.

On the other hand, these chairs help to support a lifestyle that is still far removed from our evolutionary needs. As I tell my patients, even with the best ergonomic supports (including the recent addition of sit/stand and treadmill desks), working 10-12 hours per day in front of a computer is simply an unnatural act against which our bodies will eventually rebel.

We must come to recognize that what we see as “advances” in the science of sitting serve business (production) interests first, and our bodies second.

On Low Back Support Belts