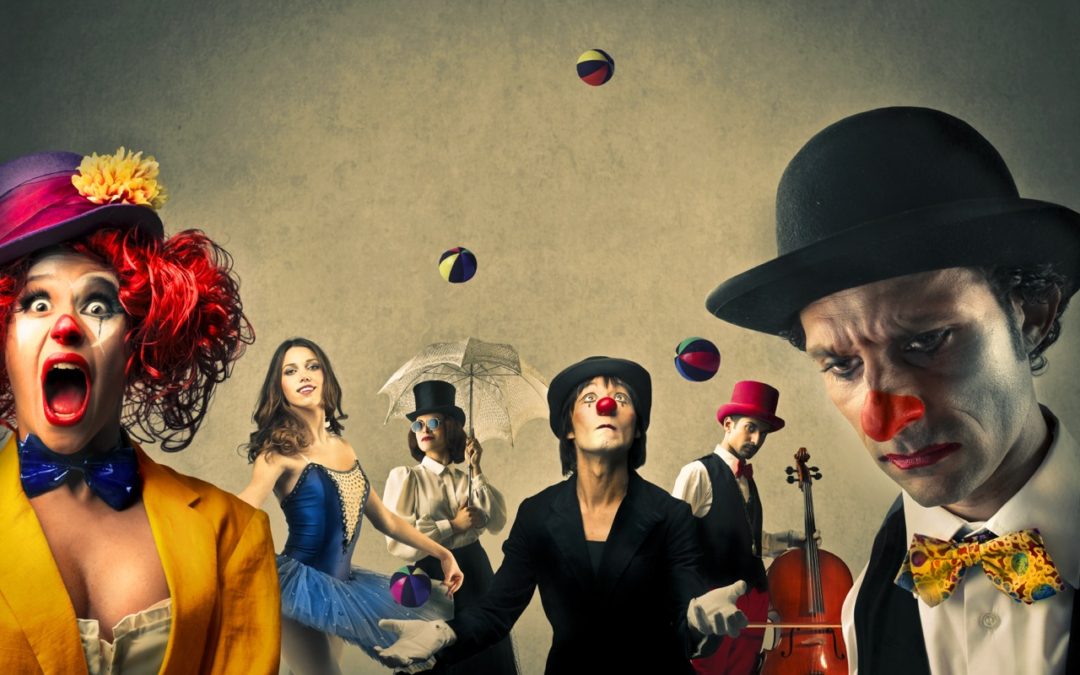 Chiropractors, Carnivals and Clowns: Seeking the Soul of My Profession

I have treated many performers: musicians, actors and dancers. They are a colorful, exciting group of men and women who choose to follow their dreams, listen to their inner voices, and dedicate their lives to the creative process. I respect and admire them.

A particular subgroup of that culture has become a treatment niche of mine: the tribe of circus performers. I have treated trapeze artists for shoulder injuries, contortionists for low back pain, and clowns for a multitude of “clown injuries”, ranging from falling off chairs (backwards) onto their backs to sliding down poles upside down and hitting their heads. (Ouch!)

I recently saw a new patient, M, who is a sword swallowing knife thrower. M also does bullwhip tricks, and lies on a bed of nails. Oddly enough, he complained of chronic neck and low back pain. I examined M, and asked about his work. Just as a tech worker has to be sure that her ergonomic workstation is biomechanically balanced, a sword swallower must be sure he is using his body in the most appropriate, efficient manner. If these workers are not mindful, they will almost always end up with/in pain.

My therapeutic approach is rooted firmly in biomechanics. I taught the sword swallower how to keep his spine in neutral position when doing his act. I suggested stretches to keep his spine flexible, and exercises to strengthen his core so it could provide a stable foundation for the rest of his spine. Of course, I also treated him to relieve the pain he presented with. This took the form of deep muscle work to loosen tight muscles, and spinal manipulation to restore the motion of immobile joints.

M told me that before seeing me, he had been to another chiropractor. This chiropractor examined him, took x-rays of his spine and then made treatment recommendations. He showed M a series of wall charts, illustrating the “four stages of spinal degeneration” and M was told that he was in Stage Three. The Stage Three chart had a spinal x-ray of bones and discs with calcium deposits around the joints. M was told that he urgently needed care to avoid slipping into Stage Four, the final stage, in which his spine would be a mangled fusion of bone and soft tissue.

As I shook my head, my patient laughingly assured me that he had enjoyed the first chiropractor’s story. Not that he accepted his recommendations (which is why he was seeing me); but that he felt a kinship with this chiropractor. M felt that he and the chiropractor were from the same world: the world of the carney sideshow. Using fear (of complete spinal degeneration), the chiropractor holds out the hope of salvation (freedom of motion and a youthful looking spine) through the (magic of) chiropractic adjustments. Like the magician who saws a woman in half and then makes her whole again, the chiropractor can restore the maimed, put them back together, even make them young again.

Now don’t get me wrong. I know the power of chiropractic and have seen things that are close to miracles take place in my office. But I have also seen chiropractors razzle-dazzle patients and convince them that with many months of care, almost all of their ills will be cured.

BJ Palmer was the son of the founder of modern chiropractic. He was also known as the “developer” of my profession. In the early 1900s he held meetings in large tents where he would extoll the virtues of chiropractic. Hundreds of people would come from near and far to hear BJ tell the “Good News” of chiropractic. They would then get treated in the large clinics of the college that BJ had grown into a major educational institution.

Combining the skills of a Pentecostal preacher and PT Barnum, BJ inspired both patients and chiropractors. BJ BELIEVED! He believed in the healing power of chiropractic, in the ability of the chiropractor to channel the universal life force generated by God Himself through his or her chiropractic hands. We chiropractors were part of a holy mission to heal the world.

Over the years, BJ’s inspired vision was substantiated by medical science and proved itself a successful alternative to more invasive procedures. But it also got mixed up with the business of American health care. Because chiropractors were long kept out of the mainstream of medicine, unable to work in hospitals and larger integrative medical settings, we have been forced to be small businessmen and women, hustling like corner grocery store owners.

As a result of this, we have seen some pragmatic schemes to increase our profile. One of these is the rise of chiropractic business management seminars, which provide advice on how to “succeed”. Unfortunately, such advice often includes scare tactics (e.g., “the four stages of spinal degeneration”). We buy videos and other promotional materials that make unsubstantiated claims about chiropractic care which we then ask patients to watch or read. And, we sometimes pitch intensive, protracted, and expensive treatment programs; the pitch ideally delivered as if we were channeling old BJ himself. This, of course is what M had encountered.

I treated my knife throwing, sword-swallowing patient three times. His pain was gone. But I also educated him about the meaning of symptoms. I explained how symptoms often fool us and why regular, appropriate exercises–with intermittent chiropractic care to maintain the mobility of his joints–were what he needed. We modified his bullwhip technique and the heavy bed of nails was put on wheels. As for his sword swallowing…well, that was a tough one to change. At twenty-six inches, the sword dictates the posture. Fortunately, this part of his act goes quickly.

Chiropractic is an amazing art and science, and I have been fortunate to have it as my vocation. As a healing technique, it stands on its own, providing relief from suffering without drugs or surgery. It does not have to be packaged and promoted like a sideshow.

Ringmasters and lion tamers are great fun. Let’s enjoy the circus when it comes to town. But let’s not make our profession seem like a part of it.