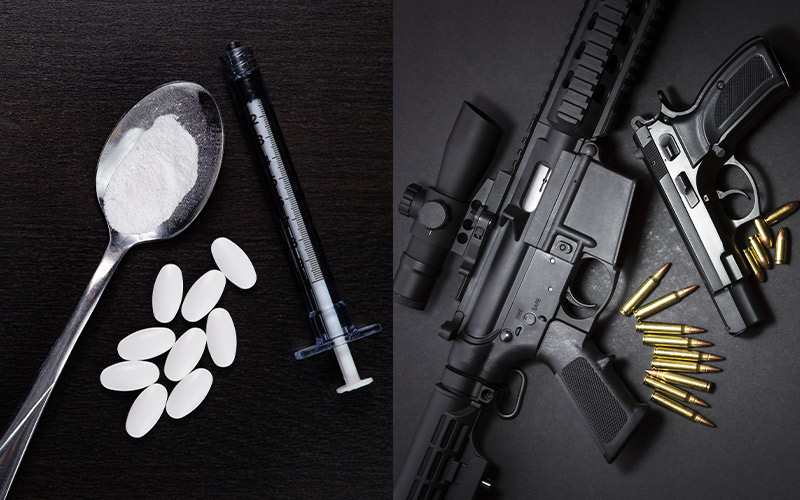 On the Opioid and Gun Violence Epidemics: Rationales in Common

We are currently in the midst of the most lethal drug epidemic in our country’s history. One of the shocking things about this crisis is that it has been going on for the past 20 years without showing any signs of letting up.  In 2016, overdoses involving opioids killed more than 42,000 people.  Of those deaths, 40% were from prescription opioids.   (Statistics are still being finalized for 2017.)

Several recent books describe the evolution of this epidemic, each from a slightly different perspective.*  I’ll focus on just one of them here.

In Dopesick, Beth Macy tells how representatives from Purdue Pharmaceuticals—manufacturers of the powerful pain killer Oxycontin—downplayed the roll of their drug in the deaths of patients.  They asserted that this was the fault of patients and other consumers who abused their important and useful medicine; that Oxycontin was an important tool in the armory against severe pain.  And not just for the pain of terminal cancer, where these drugs were typically utilized, but also for chronic back pain.

Purdue held to a fraudulent claim that Oxycontin was only addictive for 1% of its users.  This statistic was based upon a letter written to the New England Journal of Medicine from a single physician. There were no scientific studies to back up this and similar claims, yet they became the backbone of Purdue’s sales and marketing campaigns—campaigns that led to the flooding of America, from small towns to urban centers, with millions of pills.

As I read Dopesick, it struck me that these specious claims echoed the marketing and sales pitches of today’s firearms manufacturers and apologists.   How often do we hear that “guns don’t kill people—people kill people.” Or that “the best defense against a bad guy with a gun is a good guy with a gun.”

These are all variations on a theme: Both guns and opioids are neutral tools that can be used for good or evil.  It all depends on the user.

What is also interesting is that the common sense recommendations to control the epidemic-level proliferation of both guns and opioids, and to limit their dangerous “side effects,” often sound similar:

—For guns, we need a centralized database that can be used for background checks before a gun sale can be legally made.

—For opioids, we need a centralized database that can be used by physicians to see where a patient has already received prescriptions for oxy (and similar medications).  New prescriptions should not be written until the patient’s history is verified in this database.

—For guns, manufacturers can provide safety features that could reduce accidents— such as individualized digital locks, limitations on how much ammunition can be purchased, and restriction on the sales of certain types of semi-automatic weapons and enhancements (such as bump stocks).

—For opioids, manufacturers can formulate pills in which the potent active ingredient cannot be extracted and injected. Reduce the active content to non-lethal levels. Some people have died from their first experiment with oxy because they took a single 80 mg pill. They may have reasoned that, as oxy is an FDA-approved pharmaceutical, it could not kill them.  Unfortunately, this was not the case.

—Guns should only be sold by authorized dealers who are able and willing to access databases, and record sales into those databases.

Yet these recommendations mostly go unheeded

Pharmaceutical opioid production continues.  It is the foundational driver of this epidemic. As patient prescriptions run out and the meds become too expensive on the street, cheaper heroin follows, which is in turn followed by fentanyl: a synthetic opioid that is much stronger than all the others and much more deadly.

So how do we approach curbing this epidemic of opioid addiction and death?  Do we absolve the producers and lay all the blame on the consumers, just as we absolve the manufacturers of firearms? There is a long American moralist tradition of blaming crime on weakness of character.

Guns, their supporters argue, are tools used to protect individuals, and their possession is a right guaranteed by the Constitution.  Pain relieving medication, if FDA approved and prescribed by a licensed medical doctor, is also legal, and patients who are in pain have a right to choose their meds.

There is truth to these claims. These powerful pain killers are often necessary to control intractable back pain.  They can make life bearable, allowing many suffering people to live functional lives. And responsible citizens should have the right to own firearms for hunting, protection and sport.  Both the National Rifle Association, Purdue Pharmaceuticals and others use these similar arguments to rationalize their blocking of any regulations that may constrain sales.

The need to shift consciousness

I can’t help but wonder if anything would change should a high-ranking member of the NRA find his or her daughter or son on the bathroom floor of their well-appointed suburban mansion, dead of an oxy or heroin or fentanyl overdose. Might they then realize that these and other supposedly neutral, value free tools for pain relief, sport and self-protection can also be agents of pointless death and despair, for which the manufacturers also bare significant responsibility?

It seems like a long shot. But until a shift of consciousness takes place, both opioid and firearms epidemics will continue.

Chasing the Scream by Johann Hari

A Rationale For A Single Payer Health Care System

Interview: “A Rationale For a Single Payer Health Care System.”