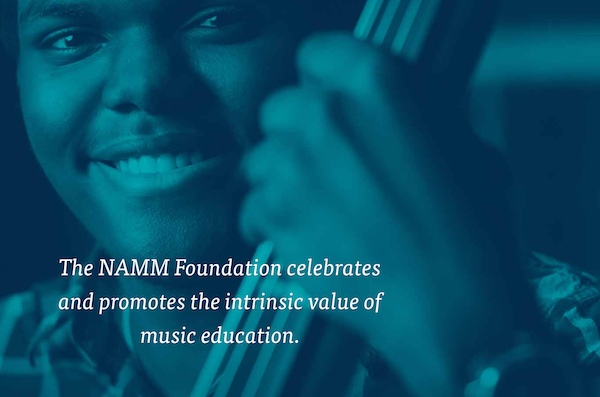 I recently returned from attending my second NAMM (National Association of Music Merchants) show.  This year, as in the past, I was working with MusiCares, the charitable health and human services arm of the Recording Academy (GRAMMYs).

MusiCares offers support for musicians in need.  Among other benefits, it helps them pay their rent, subsidizes the cost of medical services, and provides free support groups for musicians who are dealing with staying clean and sober.

As a bass player I go to NAMM to check out the latest gear.  I especially love playing with the beautiful handcrafted basses, guitars, and boutique amplifiers.  As a chiropractic ergonomist, I enjoy observing the equipment modifications made over the past year to minimize the physical wear and tear on musicians bodies.

Finally, as a doctor I volunteer in the MusiCares booth so I can answer the questions of musicians who are dealing with pain.  I advise them about proper exercises and stretches.  I recommend appropriate treatment modalities to address their complaints.  And I provide reassurance that there is a lot they can do to heal themselves.  MusiCares, essentially, lets musicians know that they are not alone; that such healing is possible.

This year, like last, I anticipated writing an article about the industry’s latest ergonomic innovations.  I saw wonderful light weight guitars, amps, and drum hardware.  I saw improved gig bags with chest and waist supports.  I saw core stabilizing piano benches.  There were many advances that excited my attention.  But on this visit, to my surprise, it was the MusiCares story itself that drew me in.

During my hours in the MusiCares booth, I spent a good deal of time talking to older players: mostly rockers in their 50’s and 60’s.  These were players who have been on the road for decades. Some have gone from playing in dive bars to filling stadiums; from traveling in vans and living on Cheetos to cruising in luxury tour buses and sleeping in five star hotels. Some of them are now back in the dives and the vans—but all remain dedicated to their music.

And all feel the cumulative physical and emotional effects of the rock and roll life.  I spoke to the lead singer of one well known punk band who told me how he had collapsed on stage during a set, a fully blown (herniated) lumbar disc leaving him without feeling in his legs, his back in fiery pain.  Emergency surgery in a Hamburg hospital followed. His health insurance “provider” in the US (to which he had been paying premiums for fifteen years) denied payment of the 6000 Euros (about $9000 US at the time) as the surgery was performed without prior authorization.

I spoke to another player who’d recently turned fifty.  The previous year he’d been playing an arena show when, in the middle of a thrashing windmill chord (a la Pete Townsend), he felt a sharp twinge in his neck; then a bolt of electricity shot into his right arm.  He powered through the set, but the next morning he couldn’t get out of bed.  Somehow he made it through the tour, but afterward he hobbled home–unable to work for months.  He had no health insurance.

I also talked to young players; guys in their twenties; the “invincible” ones.  From gig to gig, fueled by burgers, chips, adderall, and beer, they madly pound drum kits and crowd surf.  They haul their own gear onstage and off.  Sleep is an afterthought.  The early signs of wear are already showing on these young warriors: constant low grade pain, an occasional spasm.  But they accept these tweaks as “normal”: obligatory battle scars on the long crusade to fame and fortune.

Others just came by to sit and talk, and to thank MusiCares for the help it has given to them or their friends; for the money to get the customized hearing protection, for the psychologist referral, or for just being there when no one else was.

I realized then and there that NAMM is far more than a trade show. NAMM is a gathering of kindred spirits.  It’s an annual meeting of the tribe; a place where we can all come together after another year spent pursuing the holy musical grails of rock and roll, country, jazz, and classical.

Staffing that MusiCares booth with my fellow musician/healers–social workers, addiction specialists, administrative support staff–I felt like part of an ancient shamanic priesthood, serving the needs of our troubadour family.

Musicians are called to make music because of the joy it brings to them and those around them. But few of those players recognize the toll that this path can take.  When more dreams have been lost than have been fulfilled; when the adoration of the crowds has waned; or when the sheer physical duress of the working musicians life fully demands attention, there is a need to heal. And from the alchemical blend of music, open listening, therapeutic wisdom, communion and love, such healing arises.

NAMM provides the meeting ground for this process; MusiCares, the healing space.

Dr. Ricky Fishman, the Director of Musicians Chiropractic Project, has been a San Francisco based chiropractor and performing electric bass layer for over twenty-five years.  His goal is to help maximize potential by minimizing pain and dysfunction.  He believes that music is a fundamental part of the human experience and musicians should be valued and supported for providing this to us all.

Mindfulness: Stress Reduction, Path to Enlightenment, or a New Orientalism?